A faith-filled mom whose commitment to the Bible had an impact on the Western World for decades to come.

Because King Solomon wrote in the book of Proverbs that women of virtue ought to hold our gaze and receive our praise, Susanna Wesley deserves our attention.

She was the youngest of 25 children in her family, with no education and no status as a woman in her era. Life looked bleak for the ordinary English girl. Little did London know what would become of this lawyer’s daughter who held such bold Bible-based convictions.

Susanna Annesley who later became Susanna Wesley was a stay-at-home mom of nine surviving children, though she bore 19. Though a poor pastor’s wife, Susanna lived with ardor. She transformed the means she had into masterful works of love and godliness.

She educated herself for the sake of giving herself daily to the schooling of her sons and daughters—raising two world-changing sons: a revivalist preacher, John, and a masterful hymn-writer, Charles.

She persevered in prayer and spiritual disciplines for the spiritual prosperity of her children, setting an example that provided the foundation for an entire movement, called Methodism, within Christianity.

She stoked the faith of her friends and family constantly as she read and taught God’s Word, whatever it cost her. She died to her own desires and lived to serve others.

Why? Because Susanna believed that the God of the Bible was serious, in all that he said, commanded, and promised, and she served him with a loyalty rooted in true love.

THE LIFE OF SUSANNA WESLEY

Susanna Annesley was born in London, the youngest of 25 children.

When she was 19, Susanna married a parish minister named Samuel Wesley, and became Susanna Wesley.

Susanna gave birth to Samuel, her first of 19 children.

Because they could not afford proper schooling for their children, Susanna homeschooled Samuel. She eventually homeschooled all of her children for six hours per day over the next two decades.

Susanna gave birth to her 15th child, John Wesley, who became founder of the Methodist Church. He was her second son named John; the first died in infancy.

Susanna gave birth to her 18th child, Charles Wesley. He became one of the greatest Christian hymn writers.

The Wesleys lost their home to fire while Susanna was pregnant with their last child. Thankfully, no one was injured.

Susanna’s husband Samuel died and she lived her remaining years with her children.

by Jill Carattini at iDisciple

I verily think one great
reason why Christians
are so often subject to despond is that  they
look more to themselves
than to their Savior.

You will say “We are great sinners.” Very true; but Christ came into the world to save sinners; he had never died if man had never sinned. If we were not sinners we should have had no need of a Savior; but God commended his love toward us in that while we were yet sinners Christ died for us. The greatest saints in heaven were once sinners upon earth; and the same redeeming love and free grace that brought them to glory are sufficient to bring us also thither.

I verily think one great reason why Christians are so often subject to despond is that they look more to themselves than to their Savior: they would establish a righteousness of their own to rest on, without advertising enough to the sacrifice of Christ, by which we alone are justified before God… only give me leave to add one request, which is, that you would commit your soul, in trust, to Jesus Christ, as God incarnate, in a full belief that he is able and willing to save you. Do this constantly, and I am sure he will never suffer you to perish.

A Profile of Susanna Wesley’s Faith

by Arthur Dicken Thomas Jr. at the C.S. Lewis Institute

Whatever weakens your
reason, impairs the
tenderness of your conscience,
obscures your sense of God,
takes off your relish for
spiritual things,
whatever increases the
authority of the body
over the mind,
that thing is sin to you,  however innocent it
may seem in itself.

Men and Women Are Not Interchangeable

by Eric Metaxas at The Gospel Coalition

Train up a
child in the
way he
should go;
even when he is old
he will not depart from it.

Older women likewise are to be reverent in behavior, not slanderers or slaves to much wine. They are to teach what is good, and so train the young women to love their husbands and children, to be self-controlled, pure, working at home, kind, and submissive to their own husbands, that the word of God may not be reviled.

A Look Inside
Susanna’s Home

A Hero Without a Cape

by Erin Davis at Revive Our Hearts

I cannot but look upon
every soul you leave under my care as
a talent committed to me,
under a trust,
by the great Lord
of all the families
of heaven and earth.

And these words that I command you today shall be on your heart. You shall teach them diligently to your children, and shall talk of them when you sit in your house, and when you walk by the way, and when you lie down, and when you rise.

Get To Know Susanna

In his series, “Susanna Wesley: Spiritual Guide Par Excellence,” Bob Kellemen gives us a peek into Susanna’s personality. Using primary source material, he shows us how she handled her full household and the way she cared for the souls of others.

Behold, children are a heritage from the Lord, the fruit of the womb a reward. Like arrows in the hand of a warrior are the children of one's youth. Blessed is the man who fills his quiver with them! He shall not be put to shame when he speaks with his enemies in the gate.

The Praying Example of Susanna Wesley

by Jackie Green and Lauren Green-McAfee at Faith Gateway

A Prayer
for God's Help

You, O Lord, have called us to watch and pray. Therefore, whatever may be the sin against which we pray, make us careful to watch against it, and so have reason to expect that our prayers will be answered.

In order to perform this duty aright, grant us grace to preserve a sober, equal temper, and sincerity to pray for your assistance. Amen.

She speaks with wisdom,     and faithful instruction is on her tongue. She watches over the affairs of her household     and does not eat the bread of idleness.

I am content
to fill a little space
if God be glorified.

Make it your goal to live a quiet life, minding your own business and working with your hands, just as we instructed you before. Then people who are not believers will respect the way you live, and you will not need to depend on others.

Susanna’s Apron: Six Tips for Prayer as a Mom

Rejoice always, pray without ceasing, give thanks in all circumstances; for this is the will of God in Christ Jesus for you.

In sure and steadfast hope to rise And claim her mansion in the skies, A Christian here her flesh laid down The cross exchanging for a crown. True daughter of affliction, she, Inured to pain and misery, Mourned a long night of griefs and fears, A legal night of seventy years: The Father then revealed his Son, Him in the broken bread made known; She knew and felt her sins forgiven, And found the earnest of her heaven. Meet for the fellowship above, She heard the call, ‘Arise, my love,’ ‘I come,’ her dying looks replied, And lamblike, as her Lord, she died.

Written by her son, Charles Wesley

We have made a graphic so you can keep Susanna Wesley's Epitaph on your phone as your background or screensaver!

Her children arise and call her blessed;     her husband also, and he praises her: “Many women do noble things,     but you surpass them all.”

7 Women and the Secret of Their Greatness

by Eric Metaxas | Biography
Difficulty: Easy
GET THE BOOK

Memoirs of the Wesley Family

by Adam Clarke | Memoir
Difficulty: Vintage
GET THE BOOK 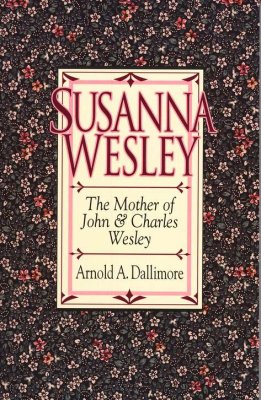 by Arnold Dallimore | Biography
Difficulty: Easy
GET THE BOOK

by Ray Comfort | Biography
Difficulty: Easy
GET THE BOOK
SHARE

A woman who
fears the LORD

is to be praised.

Is it God's Word?

How to Read It

How to Apply It

Is the Bible Relevant to My Life?

Does God Exist?
Who Is God?
What Is the Trinity?
What Is God Like?
Can We Know God?

What Is Sin?
What Is Confession?
What Is Repentance?
What Is the Unpardonable Sin?
Overcoming Sin & Temptation

Who Is Jesus?
Is Jesus Really God?
How Do We Know Jesus Is the Messiah?
The Second Coming of Jesus

What Is the Gospel?
Why Did Jesus Have to Die?
What Is Faith?
What Does It Mean to Be Born Again?
What Is Grace?

What Is Prayer?
How to Pray?
Does God Answer Prayer?

Counting the Cost
What Is A Disciple?
What Is My Purpose?
What Is Evangelism?
How to Evangelize?
What Is Missions?
What Is Church?
What Is Baptism?
The Persecuted Church

What Happens When We Die?
Is Heaven for Real?
Is Hell in the Bible?
The Second Coming of Jesus

The Apostles’ Creed
The Nicene Creed

Fear
The Answer to Anxiety
Overcoming Anxiety
Loneliness
Depression
Grief
What Is Lament?
Suicide Is No Solution
Veteran Suicide
How to Deal with Suicidal Thoughts
How to Help a Suicidal Friend

All things work together for good…
Do not be conformed to this world…
For God so loved the world…
I can do all things…
Love is patient, love is kind…

Do not be anxious about anything…
Seek first the kingdom of God…
Cast all your anxieties on him…
Be strong and courageous…
Fear not, for I am with you…

The Ten Commandments
The Lord’s Prayer

Books of the Bible

Why Should I Get a Physical Bible?

An Open Letter to My Friend in Pain

5 Reasons Jesus Died on the Cross

Here's Why You Need the Bible

Have You Ever Wondered About God?

Three Costs of Being a Christian

Four Things At Stake If We Deny the Clarity of Scripture

The What, Why, Where, and How of Being a Disciple