by Bruce, a Friend of Bibles.net
Time: 7 Minutes

I was pretty much a light-weight growing up. As such I became eligible for playing on the special “light-weight” American football team in junior high.

The season was going fine until the day when the coaches decided to have the light-weights practice with the varsity. Those were the giants that played real football. My football experience from that point on did not go so well.

There was however, one light-weight on our team that was able to fare quite well on the varsity squad. Joe did not have size but he did have heart. More importantly, Joe had technique. Time and time again, as a linebacker, he’d sting those running backs by hitting low and hitting hard in their ankles. Down they would fall, never knowing what tripped them up.

By now you may be anticipating that I am going to write about David who killed the giant Goliath. I’m not. Instead of considering those giants who have fallen, I want to think about some giants from the Old Testament who got away. They could have and should have been brought down, but they weren’t.

The Spies’ Perspective on the Promised Land

Moses sent out twelve spies to search the promised land and bring back a report. The spies all agreed that it was indeed a land that flowed with milk and honey. But ten of the twelve were very impressed by the fact that the land was currently held by giants, and concluded that it could not be taken. Only Caleb and Joshua, two of the twelve, stood ready to move ahead and take the land.

At the end of forty days they returned from spying out the land… And they told him [Moses], “We came to the land to which you sent us. It flows with milk and honey, and this is its fruit. However, the people who dwell in the land are strong…”

But Caleb quieted the people before Moses and said, “Let us go up at once and occupy it, for we are well able to overcome it.”

Then the men who had gone up with him said, “We are not able to go up against the people, for they are stronger than we are.”

So they brought to the people of Israel a bad report of the land that they had spied out, saying, “The land, through which we have gone to spy it out, is a land that devours its inhabitants, and all the people that we saw in it are of great height… We seemed to ourselves like grasshoppers, and so we seemed to them.” (Numbers 13:25-33 ESV)

In the example we have here, only a small minority understood God’s will for Israel at that time and were ready to move ahead on that basis. It’s crucial for us to try to understand—how it was that only Joshua and Caleb could discern the truth? What made them so different? Let’s take a look in God’s Word:

But my servant Caleb, because he has a different spirit and has followed me fully, I will bring into the land into which he went, and his descendants shall possess it. (Numbers 14:24 ESV, emphasis added)

And the LORD’s anger was kindled on that day, and he swore, saying, “Surely none of the men who came up out of Egypt, from twenty years old and upward, shall see the land that I swore to give to Abraham, to Isaac, and to Jacob, because they have not wholly followed me.” (Numbers 32:10-11 ESV, emphasis added)

“Not one of these men of this evil generation shall see the good land that I swore to give to your fathers, except Caleb the son of Jephunneh. He shall see it, and to him and to his children I will give the land on which he has trodden, because he has wholly followed the Lord!” (Deuteronomy 1:35-36 ESV, emphasis added)

What Does It Mean to Follow the Lord Wholeheartedly?

In trying to understand this one, I found it useful to think about the opposite, say, a halfhearted commitment. You don’t have to think too long before you conclude that it seems like there are a lot of Christians running around living less than a totally committed life.

On the positive side, when you look at those Christians who have really accomplished great things for the kingdom of God, they all have one thing in common. They were all totally committed to following the Lord Jesus, whatever it cost them. The Hudson Taylors, the D.L. Moodys, the Wesley brothers, the Jonathan Edwards, and so many others like them all shared that same spirit of wholeheartedness that Caleb had.

Are you facing a decision and don’t know which way to go? Wholehearted commitment to following the Lord is essential for us to totally understand God’s leading.

Sometimes, God’s best plan for us takes us through a land filled with giants. Nothing less than following the Lord wholeheartedly can bring us through these places. Most people will see the giants and conclude that God’s will can’t be done; the problems are too big.

Wholehearted people look beyond and above the giants and see the will, the promises, and the power of God Almighty—they rely on his Word and his Spirit, rather than on what they see. From that perspective, the giants are manageable.

Look at the size of the men in the box below. Which man is larger? 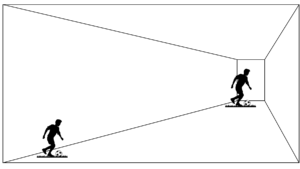 The reality is that each man is the exact same size. It doesn’t appear that way, however, because of the point of reference.

With God as the point of reference, the problems of life do not loom as large. That’s why we need God’s Word to give us God’s perspective. The proper reference for life only comes with a wholehearted commitment to following him, which means a commitment to opening our Bibles, seeking to see things from God’s point of view.

Do You Have a Wholehearted Devotion to the Lord?

When it came to football, Joe knew exactly how to bring down the big ones. He would look low and hit them on the ankle.

Christians, however, don’t look low, we look up. We need to look up and beyond to God above. We need also to look within and make certain that we follow him with a whole heart.

But what if we don’t want to follow him wholeheartedly?

First, when we see that our heart is divided, we should go to him humbly and ask,

Teach me your way, Lord, that I may rely on your faithfulness; give me an undivided heart, that I may fear your name. (Psalm 86:11 NIV)

What will God’s answer be? We find in Ezekiel:

I will give them an undivided heart and put a new spirit in them; I will remove from them their heart of stone and give them a heart of flesh. (Ezekiel 11:19 NIV)

We know that this is what Jesus Christ came to accomplish for us—he lived a wholehearted life of devotion to God, suffered in our place, and rose from the dead so that he could create in us who believe in him new hearts—wholly devoted to God.

Do you want wholehearted devotion to the Lord? Ask Jesus Christ today, and rely on his Word, that he will give it.

Then, live out God’s promise to change you! Put away anything that draws your devotion away from him and devote your heart fully to him!

This article was written by our editorial team here at Bibles.net. We like to write articles as a team—one person writing, another editing, another proofreading, and all of us making sure we stick to the truth and say it well. If you'd like to find out a little more about all of us, check out our "About Us" page.
Related Topics

3 Marks of a Follower of Jesus